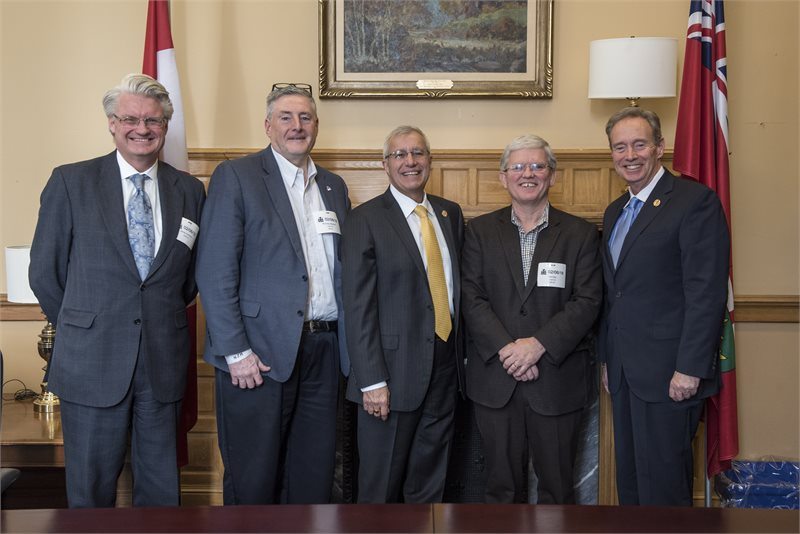 Mr. Fedeli is a graduate of Ontario’s publicly funded Catholic school system (St. Joseph-Scollard Hall Catholic Secondary School in North Bay). As a strong supporter of Catholic education in Ontario, Mr. Fedeli affirmed to OCSTA that his beliefs are rooted in his Catholic faith.

During the meeting, OCSTA representatives updated Mr. Fedeli on the priorities of Ontario’s CDSBs that include the need for adequate funding to address current transportation needs throughout the province, special education funding short falls at CDSBs, and rising sick leave costs. Mr. Fedeli and Mr. Coe reiterated the PC platform commitment to special education funding and the need to review the overall funding formula for possible adjustments.

Further discussion focused on a commitment to addressing student mental health needs, especially in the northern and rural areas of the province.

Mr. Fedeli agreed that a regular briefing from OCSTA would be helpful in terms of understanding the policy/funding issues impacting the education sector.

OCSTA’s 88th Annual General Meeting and Conference will this year be co-hosted by the Waterloo Catholic District School Board, April 26 – 28, 2018 at the Crowne Plaza Hotel in Kitchener. The theme of this year’s conference is “Stewards of the Promise” — a theme that focuses upon the role of publicly elected Catholic trustees in leading, protecting and promoting the gift and promise of Catholic education in Ontario.

This year’s OCSTA/OCSBOA Business Seminar will be held April 26, from 10:30 a.m. to 3:15 p.m. at the Crowne Plaza Hotel in Kitchener (immediately prior to the launch of the OCSTA AGM and Conference later that evening).

To view the program and register online please click here.