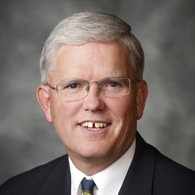 TORONTO, April 25, 2022 – The Ontario Catholic School Trustees’ Association (OCSTA) is pleased to announce that Patrick J. Daly, Chair of the Hamilton-Wentworth Catholic District School Board, has been re-elected as President of OCSTA following elections that were held during the Association’s 92nd Annual General Meeting in Ottawa.

“I am honoured and humbled by the trust that the membership of the OCSTA has placed in me. I am inspired by the goodness and commitment of Ontario’s 237 Catholic school trustees as they faithfully serve as strong advocates, good stewards and servants and political leaders of the school systems entrusted to their care. I pledge to work with each of them, the OCSTA Board of Directors and Provincial Catholic Education Partners as we continue to strive to ‘place Christ and the teachings of the Catholic Church at the centre’ of publicly funded Catholic education,” said President Daly.

The following trustees were appointed to the OCSTA Board of Directors for the 2022-2024 term:

Region 12 OCSTA Director Mark Mullan was elected by the membership to represent OCSTA on the Board of Directors for the Canadian Catholic School Trustees’ Association.

The complete list of trustees on OCSTA’s Board of Directors can be viewed at https://www.ocsta.on.ca/ocsta-board-of-directors/.

The Association was pleased to acknowledge outstanding Catholic education leadership and service to others through the annual OCSTA Award Program. This year’s awards recognized the following individuals:

For further information: or to arrange an interview: Sharon McMillan, Director of Communications, Tel: 416-460-7937/E-mail: smcmillan@ocsta.on.ca.