Inside this Issue: [toc] OESC Portal Do you know what OESC is and what this organization does for your school board? The acronym OESC stands for the Ontario Education Services…

Do you know what OESC is and what this organization does for your school board? The acronym OESC stands for the Ontario Education Services Corporation.  This is a non-profit corporation and it is governed by all four trustee associations in the province and the Council of Directors of Education. The purpose of this corporation is to provide, at a reasonable cost, various services that school boards require.

One of the services offered by OESC for school board administrative staff is an online resource called the OESC Provincial Portal. This Portal is an electronic database for school board staff use that can be accessed directly from a link located at the top of any page on the OCSTA website.  The portal offers a wealth of information on school board labour matters and is an effective platform for related communications.  A key feature of the system are the interactive and responsive tools that support member feedback and the sharing of relevant information among platform users.

School board staff must have a distinct user name and password to access this Portal. If you do not have this Portal login information, please contact Pam DeNobrega at pdenobrega@ocsta.on.ca / (416) 932-9460.  To visit the portal click here.

The next event for Catholic school boards on the OCSTA calendar is the Catholic Trustees’ Professional Development Seminar being held January 17-18, 2014 at the International Plaza Hotel in Toronto (655 Dixon Rd.).

This event offers the opportunity for OCSTA members to:

For more information and to register online please visit

The Passing of Earl McCabe and James Sherlock

From the Hamilton Spectator 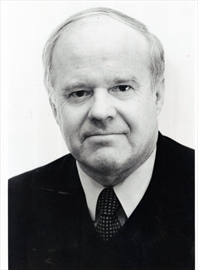 James Sherlock was a longtime Halton Catholic School Board trustee who advocated for full funding of the Catholic system.
ByDaniel Nolan

James Sherlock was a longtime Catholic school board trustee and administrator who played a role in the province’s 1984 decision to extend full funding to Catholic high schools.

From 1986 to 1988, he played a role in implementing that funding across Ontario when he headed up the Completion Office — Separate Schools, created by Catholic school boards and bishops.

“He was one of the giants in terms of working toward that ultimate goal,” said Pat Daly, chair of the Hamilton-Wentworth Catholic District School Board.

“He had a keen financial mind and he was clearly one of the leaders in the Catholic community in bringing that about. He was one of those people everyone looked up to, and not just locally, but trustees throughout the province.”

For about 15 years through the 1960s and 1970s, Sherlock worked for what was then called the Hamilton-Wentworth Roman Catholic Separate School Board as a business administrator (he also spent a year with the Ministry of Education in 1974).

Between 1976 and 1979 he worked as a staff member for the Ontario Separate School Trustees’ Association. He got elected in 1978 as a Burlington trustee on the Halton separate school board and from 1979 to 1993 served as a director and president of the OSSTA. He served for 22 years on the Halton board, including six as chair.

Sherlock lobbied the province to extend full funding to the Catholic system based on the 1867 BNA Act mention of “separate school rights.”

“That was huge,” said Sherlock’s son John Mark, 43. “That was one of his big drives. He used to tell me about Bill Davis. He told me Bill Davis was a classy guy. He told them they had a case.”

Sherlock, who worked 1979 to 1999 as the business administrator of the Diocese of Hamilton, died Aug. 31 of cancer at the Carpenter Hospice in Burlington. He had just turned 80. His son said he had been ill for about two years.

Sherlock was one of eight children — six brothers, two sisters — born to John Joseph and Catherine Sherlock of Brantford. The couple was from hearty Irish stock that settled near Smiths Falls decades ago.

Sherlock attended St. Mary’s School and Brantford Catholic High School. He attended St. Jerome’s College in Waterloo, McMaster University and the University of Toronto. He obtained his master’s degree in education at the latter.

John Mark said his father almost became a priest and went to a Quebec seminary in the early 1950s. He had to leave and return to Brantford when his father became ill.

Three of his brothers, however, went on to serve the church. John Michael Sherlock retired in 2002 from serving as the bishop of London since 1978, and Reverend Philip Sherlock, a former teacher at Cathedral Boys School in Hamilton, is now at St. Clement’s Parish in Cambridge. The third, Reverend William Sherlock, died in 1981.

James Sherlock, after working in office jobs, was hired as a teacher-coach at Bishop Macdonell high school in Guelph in 1959. It was here where he met gym teacher Catherine Carere. They wed in 1966.

Sherlock also served with many agencies, such as the board of St. Joseph’s Hospital, and received many plaudits, including an award of merit in 1994 from the OSSTA.

Diane Rabenda, chair of the Halton Catholic District School Board, called him “an extraordinary individual who made a lasting impression on all whom he met.”

Retired Hamilton Bishop Anthony Tonnos (1984 to 2010) recalled Sherlock worked hard on the full funding question along with many other issues. He said he was a very caring person with a great sense of humour.

“He was an extremely honest and loyal man,” said Tonnos. “Jim Sherlock was as honest as the day was long in every aspect of his life.”

The following excerpt from the Thunder Bay Chronicle Journal offers a poignant tribute to Earl McCabe, former Deputy Director of the Association when it was known as the Ontario Separate School Trustees’ Association:

M. Earle McCabe, age 82, passed away peacefully at his home with his daughters and family at his side, Sunday, August 18, 2013. Earle had recently relocated to Thunder Bay.

Born in Port Arthur, the son of Dorinda (Walsh) and Capt. N.Vincent McCabe, Earle attended St. Andrew’s Separate School and went on to St. Paul’s College in Winnipeg, and to Kings Business College. Married on August 31, 1957, to Madeleine Papineau, they welcomed the birth of their two daughters, Maureen Denise in 1959 and Margot Florence in 1963. Their home on Hinton Ave. and their camp at Sunnyside Beach were always places of welcome for family and friends.

Earle’s business acumen followed him from his early days at Lowery’s to Clerk of the Small Claims Court, to Administrative Manager at Carrel and Partners Law Firm, and culminated in his becoming Deputy Director of the Ontario Separate School Trustees Association.

Earle was deeply committed to serving his community, particularly the advancement of Roman Catholic education. To this end, he served 22 years on the Port Arthur and Lakehead Separate School Boards, holding the office of Chairman for 10 years. He was also a Vice President of the Ontario Separate School Trustees Association. He relentlessly pursued the extension of separate school funding to include high schools, lobbying various levels of government until it came to fruition in 1984.

He was a member of the Knights of Columbus becoming Grand Knight of the Leo Council 1130, a charter member and officer of the Fourth Degree Father Baxter General Assembly and the Las Navas 152 Order of Alhambra. Passionate about politics, he served on the executives of both the Port Arthur provincial and federal Progressive Conservative Riding Associations and later continued his association in Toronto. He was president of the Sunnyside Campers Association and a member of the Board of Governors of the Lakehead Symphony. He avidly followed world politics and sports, particularly “his” Blue Jays!”