The Premier’s Awards for Accepting Schools recognizes innovative work being done in schools to create a safe and accepting environment for students.

Nominations are now open. Download the nomination from and submit before the deadline of February 21, 2014, 5 p.m. (Eastern Standard Time).

The 2014  theme for Catholic Education Week is “Serving in the Love of Christ” and this week of celebration is scheduled for May 4 – May 9, 2014.

To help boards promote the themes for Catholic Education Week throughout the year design files have been created to be used on CDSB websites and materials.

News from Across the Province

Niagara Catholic raises more than $250,000 for their local community and world-wide initiatives…learn how they achieved this. 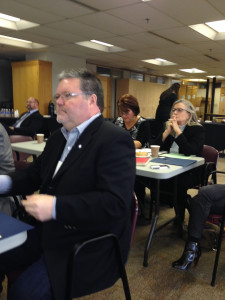 More than 30 representatives from Ontario’s Catholic School boards and our diocesan communities convened in Toronto on November 15 to discuss best practices in Catholic education communications and public relations.

The event was hosted by the Dufferin-Peel Catholic District School Board and featured the following presentations: