The purpose of the day was to raise awareness about the achievements and contributions of Ontario’s publicly funded Catholic schools to the life of our province, and in particular to the constituencies represented by the MPPs FACE delegate teams met with throughout the day. Delegates discussed current issues in education and provided to MPPs infographic sheets that provided timely facts about Catholic education at the provincial and local levels.

We sincerely appreciate the participation of the following members of the FACE Delegation Teams:

FACE Delegates were also seated in the House galleries and were acknowledged during Question Period by Members. Following are excerpts from Hansard featuring acknowledgements and recognition for FACE members and Ontario’s Catholic schools:

Hon. Mitzie Hunter: I would like to welcome members for the Friends and Advocates for Catholic Education, FACE. They are attending question period this morning as part of FACE’s Queen’s Park day. I had the pleasure of meeting them this morning along with Minister Albanese. Of course, I would like to welcome Thomas Cardinal Collins, Archbishop of Toronto. Joining Cardinal Collins, we have Bev Eckensweiler, who is the vice-president of OCSTA; Barb Dobrowolski, who is the second vice-president of OECTA; Nicolas Bottger, who is the president of the Catholic Board Council, student trustee; Manuela Zapata, vice-president of the Catholic Board Council, student trustee; and Carole Allen, project manager for FACE. Please welcome them to Queen’s Park, along with many others.

Mr. Harinder S. Takhar: I want to welcome Mr. Thomas Thomas. He’s a trustee for the Dufferin-Peel Catholic District School Board. He is my constituent and a good friend as well, so welcome.

Hon. Jeff Leal: I just noticed a constituent of mine up in the west public gallery: Mr. Tim Moloney, who is a superintendent with the Peterborough Victoria Northumberland and Clarington Roman Catholic separate school board. Mr. Moloney.

Mr. Jim McDonell: I’d like to welcome the Most Reverend Bishop Marcel Damphousse. He’s the former bishop of Alexandria-Cornwall and he’s the current bishop of Sault Ste. Marie. Welcome.

FACE delegation teams met with the following MPPs during the day:

At the end of the day, a special FACE reception celebrating Ontario’s Catholic schools was held in the Legislative Dining Room. Representing the FACE partners and serving as host for this event was OCSTA President, Patrick Daly who welcomed and introduced the following key presenters for the evening:

OCSTA wishes to acknowledge and thank all the following students who participated in this year’s Lobby Day activities and actively demonstrated the tremendous value of a Catholic education:

The school also had on display the Red Dress Project which was first created by Métis artist Jaimie Black to remember and raise awareness for the missing and murdered Indigenous women of Canada. The students created their own display featuring small red dresses with messages by visitors written about prayer, hope and action.  The students’ goal is to mount 4000 red dresses on this installation representing the 4000 missing Indigenous women.

The student soccer players and coach from Bishop Marrocco/Thomas Merton CSS – Toronto Catholic District School Board attended the reception to share with MPPs and other guests their experience visiting the community of Attawapiskat to support Indigenous students and provide soccer camp opportunities. The community of Attawapiskat has been sadly impacted by issues of youth suicide and depression and the soccer students from Bishop Marrocco/Thomas Merton CSS felt strongly about initiating and maintaining an outreach to their peers in this community.

Students from the Peterborough Victoria Northumberland and Clarington CDSB who travelled to France recently as part of the worldwide commemoration of the 100th Anniversary of the Battle of Vimy Ridge were also in attendance  to share their experiences about participating in this historic and important event.

Also in attendance at the reception were representatives from a number of Catholic education partners in Ontario including: AFOCSC, Catholic Principals’ Council of Ontario, English Catholic Council of Directors of Education, Institute for Catholic Education, and Ontario Catholic Supervisory Officers’ Association.

This successful event was coordinated under the leadership of FACE Project Manager, Carole Allen. 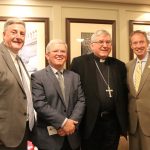 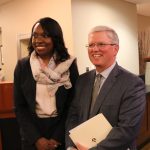 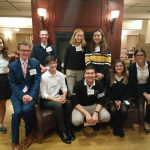 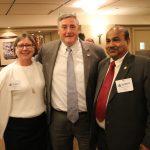 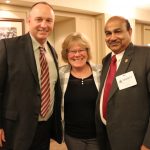 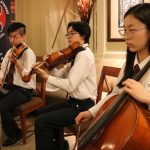 Students from Cardinal Carter Academy for the Arts

The recent OCSTA Annual General Meeting and Conference, April 26 – 28, was a successful event bringing together members for fellowship and engaging discussions on timely topics from governance to local advocacy and featuring speakers from the Minister of Education, Mitzie Hunter, to former MPP Dr. John Milloy (“Faith’s Contribution to Our Secular World”) to TV Ontario host, Steve Paikin (“The Legacy of Ontario Premier Bill Davis”)

Please note that audio recordings of all plenary sessions and PowerPoint slides are available for download directly from OCSTA’s Members’ Centre at this link: https://www.ocsta.on.ca/2017-ocsta-event-presentations/ .

The Association wishes to thank and acknowledge the York Catholic District School Board for their outstanding contribution as the co-host for this year’s Conference and for the design, coordination and presentation of this year’s memorable Opening Liturgy. 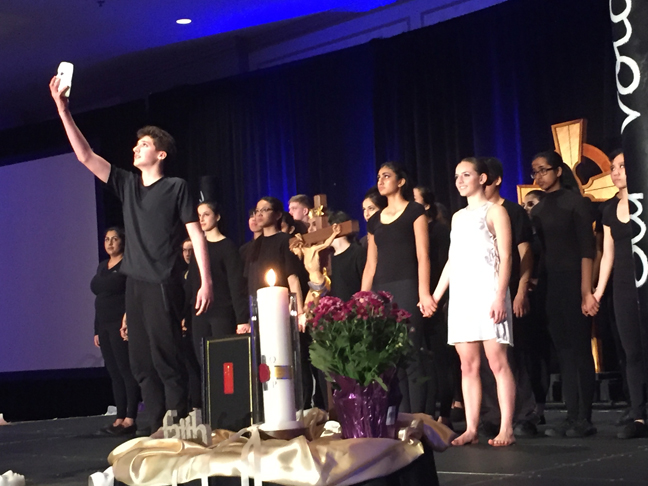 An exciting part of the opening ceremony featured the Fr. Bressani Catholic High School Drum Line which we invite you to view and listen to here:

With much appreciation we are pleased to acknowledge the following York CDSB conference planning committee members, schools and staff who participated in the 2017 OCSTA AGM and Conference:

“I want to thank all candidates who stepped forward to be a part of this election. Serving as a Catholic trustee is a call to service that requires significant commitment at the local level. Choosing to serve the mission of Catholic education at the provincial level as a Regional Director is an added commitment that directly contributes to the Association’s success at advancing the priorities of Ontario’s publicly funded Catholic schools,” said OCSTA President Patrick Daly.

Each year OCSTA selects a trustee who has demonstrated outstanding commitment and service to Catholic education to receive the Association’s Award of Merit. The 2017 recipient is Renfrew County Catholic District School Board Trustee Andrew Bray. Andrew has served his board as a trustee for 33 years and contributed to a number of provincial education initiatives as a former member of OCSTA’s Board of Directors.

This year OCSTA introduced a new award that acknowledges former student trustees in Catholic schools who have exemplified through their post graduate pursuits, the values promoted in the Ontario Catholic School Graduate Expectations.

Two student trustee alumni were selected for the 2017 award: 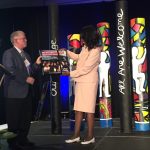 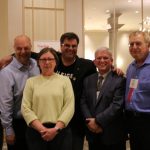 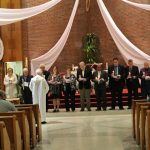 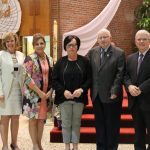 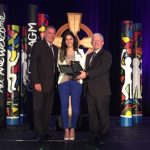 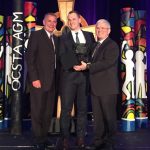 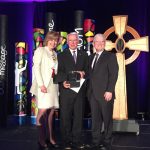 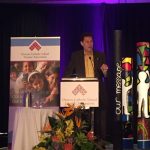 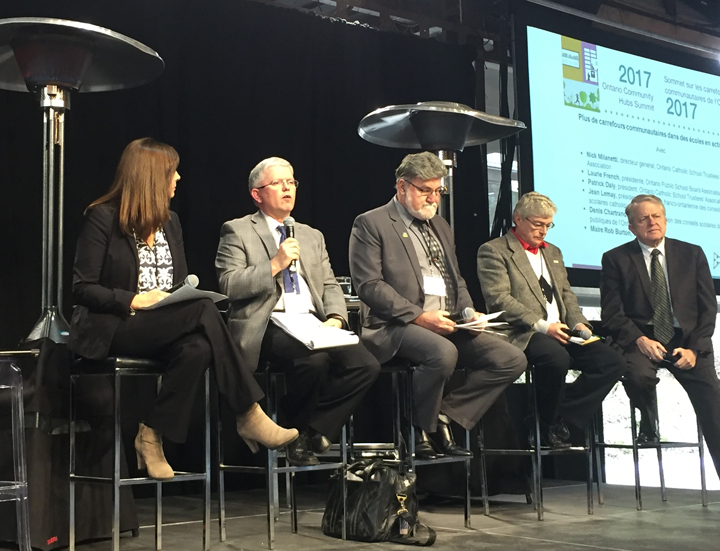 Since the inception of the Community Hubs Secretariat in 2015, OCSTA has continued to communicate to Karen Pitre (the Premier’s Special Advisor on Community Hubs) the perspectives and priorities of Catholic schools regarding Community Hubs in schools.

This past year OCSTA supported the Secretariat in the coordination of a Community Hubs Summit that was held May 1- 3 at the Evergreen Brick Works in Toronto.  OCSTA and Ontario’s other trustee Associations participated in a panel discussion that explored the opportunities and issues regarding Community Hubs in operating schools. Participating on the panel were: OCSTA President, Patrick Daly; OPSBA President, Laurie French; Président, Association franco-ontarienne des conseils scolaires catholiques, Jean Lemay; Président, Asociation des conseils scolaires des écoles publiques de l’Ontario, Denis Chartrand, and; Rob Burton, Mayor, Town of Oakville.

Director of Education, Linda Staudt of the London District Catholic School Board also participated in the Summit as a lead presenter with Lynn Livingstone, Managing Director, City of London. Together they discussed and highlighted the successful hub/Family Centre at St. Francis Catholic Elementary School (a school in the London DCSB that has excess student spaces). The Family Centre at St. Francis CES arose out of an effective partnership between the London DCSB and the City of London.

In addition to the Community Summit, an online Resource Network for Community Hubs was recently launched by the Ministry of Infrastructure’s Community Hubs Division. This resource has been developed with input and insight from various provincial groups, including OCSTA, and local organizations with significant interest in Community Hubs.

The still-in-beta-mode network includes a location-based partnership tool to find potential partners in your district, and other tools including:

A Wellington CDSB Family Story about Chores, Wells, and Changing the World 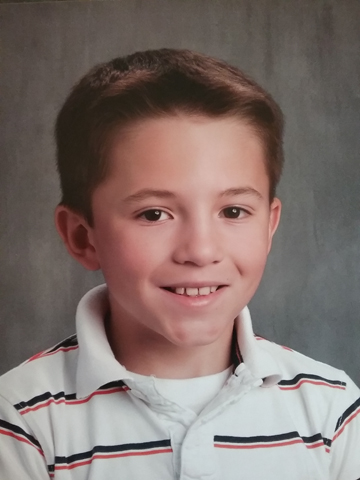 How a grade 5 Catholic elementary school student is telling his story and in the process helping a community in need half way around the world. Click here to read the whole story.

Special Education Funding for the North

The province is increasing support for approximately 20,000 students with special education needs across Northern Ontario, to help ensure that every student can be successful and reach their full potential.

The creation of a new Northern Supports Initiative and increases in the Special Education Grant will benefit students in 22 school boards, and help address the unique challenges of school boards operating in Northern Ontario. This new funding will:

The targeted increases to the Special Education Grant will also assist school boards operating in remote and rural communities, as well as French-language school boards.

Enabling more students to achieve success in school and beyond is part of Ontario’s plan to create jobs, grow our economy and help people in their everyday lives.