Inside this Issue: [toc] Provincial Election Update With the provincial election happening in a few short weeks (June 12) candidates are presenting their party platforms in schools and other community…

With the provincial election happening in a few short weeks (June 12) candidates are presenting their party platforms in schools and other community locations across Ontario. To ensure the issues that are important to Catholic school boards are addressed by candidates, OCSTA sent to board leaders a suggested strategy and messaging ideas.  If you have any questions, please do not hesitate to contact OCSTA.

During this campaign period, OCSTA president, Kathy Burtnik, has met with party leadership teams to personally relay the priorities of Catholic district school boards, in addition to issuing a letter to each of the major party leaders to confirm their platforms with respect to education.

Resources for trustees running in the fall municipal election can access key resources on OCSTA’s Municipal Election Page. Also included on this page is information to assist ratepayers in voting for their Catholic school trustees. We encourage all trustees to visit this page and to share the information with their constituents.

For an example of how one board is using this information, see the Dufferin-Peel CDSB’s campaign “Are you Ticked?” (it’s good!) – click on the image below to view more. 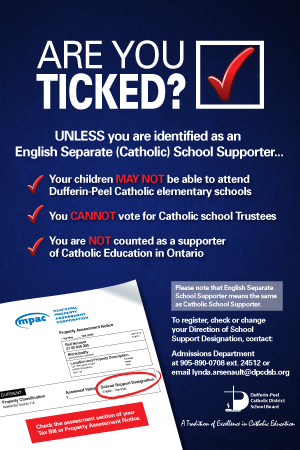 Earlier this year MPAC launched voterlookup.ca which is a website that allows eligible electors to confirm or update their information for the upcoming municipal and school board elections. Of note to Catholic school boards is the fact that electors can check and update “school support” information. The default mechanism currently in place in Ontario will automatically default school support information to “public” unless electors specifically indicate that they are separate school supporters.

To confirm that information about an elector is accurately recorded for the upcoming elections, users need to provide:

Highlights from the province-wide Mass celebrated at the Toronto and Ottawa Catholic school boards were shared in a previous post and we’re happy to share in today’s newsletter the following highlight from one of the student trustees responsible for creating this year’s province-wide liturgical initiative – Michael Pallotto, Student Trustee, York Catholic District School Board. 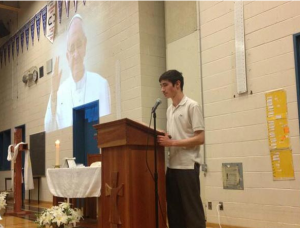 This past Wednesday, May 7th was a historic day for Catholic Education in Ontario. It was a monumental achievement that brought schools and communities together to celebrate Mass, across the entire province of Ontario. At my school, Sacred Heart Catholic High School, the celebration was alive and it was one of the first times where the entire school gathered as one for such a celebration. Typically, at Sacred Heart CHS, the morning is divided into two masses in the cafeteria to accommodate for the large number of students, but on Wednesday, everyone filed into the gym for the mass at the same time. It was amazing. The event was presided over by Father Roy Roberts, who spoke to the students about the power of Catholic Education. Furthermore, our school mass had an even deeper spiritual meaning as a few of the songs chosen were also ones chosen for last year’s Dunsmuir family funeral mass. This event allowed the school to brave through their sorrow once again as a whole community. School Trustee, Theresa McNicol was also present and took in the mass with the Sacred Heart students. Overall, the event was a success — it gave the students great pride in their faith and as well their school. — Michael Pallotto

The theme for next year’s Catholic Education Week will be announced on June 16.

In today’s issue we’re pleased to share a video spotlight on the Niagara Catholic District School Board.  This short video provides an interesting perspective on the board as shared by Fr. Thomas Rosica, CEO of Salt and Light TV. 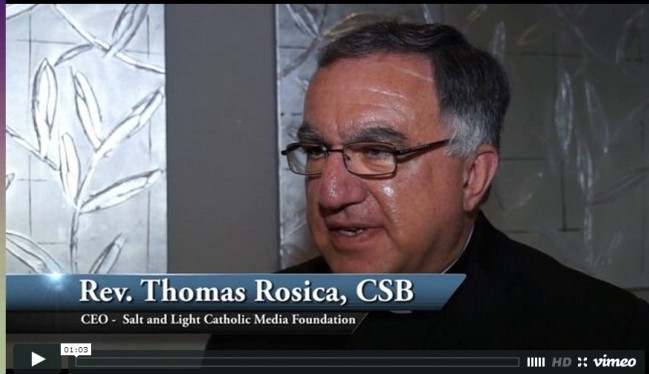 If you have a short (2-3 minute) video about your CDSB that you’d like us to feature in the OCSTA Newswire, please send your video link to:  Sharon McMillan, Co-ordinator, Communications and Media Relations – smcmillan [at] ocsta.on.ca. 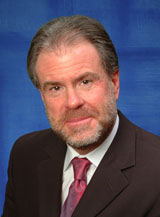 The Ontario Education Services Corporation is pleased to announce the appointment of Don Drone as its new Executive Director. Don is the outgoing Director of Wellington Catholic District School Board. He replaces Bob Williams who has provided strong, creative leadership to the organization since its inception.  Read more