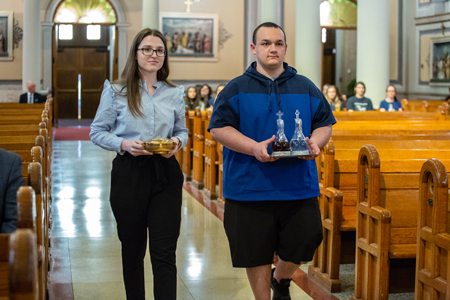 As Ontarians prepare for the June 7 provincial election, issues that are important to Ontario residents are being directed to candidates at debates and town halls province-wide. For your reference OCSTA’s key education funding and policy priorities document has been edited to include suggested questions for provincial candidates (and post election meetings with MPPs). 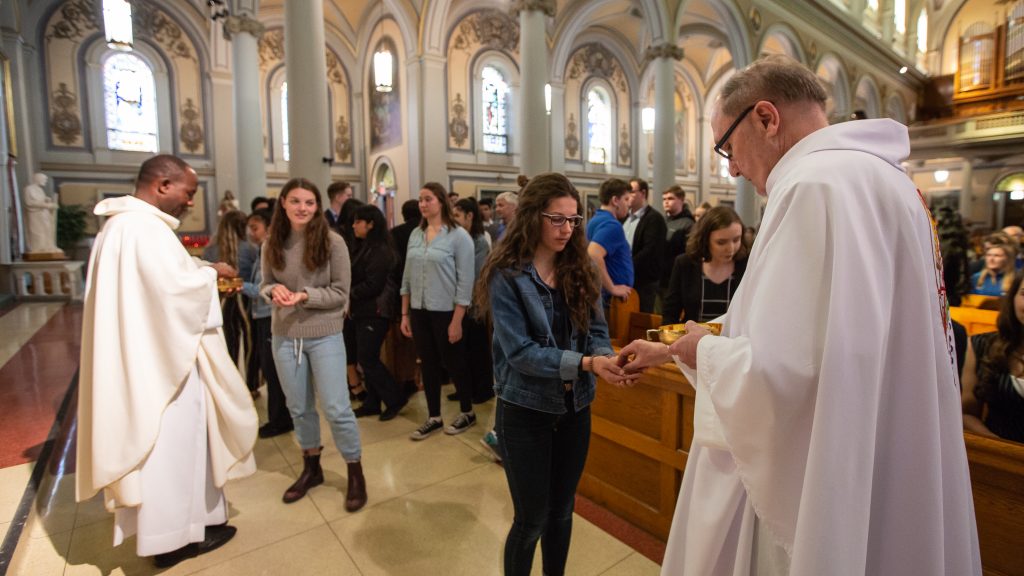 The day opened with a beautiful Mass celebrated by His Excellency, Bishop Gerard Bergie at St. Paul’s Basilica in Toronto. 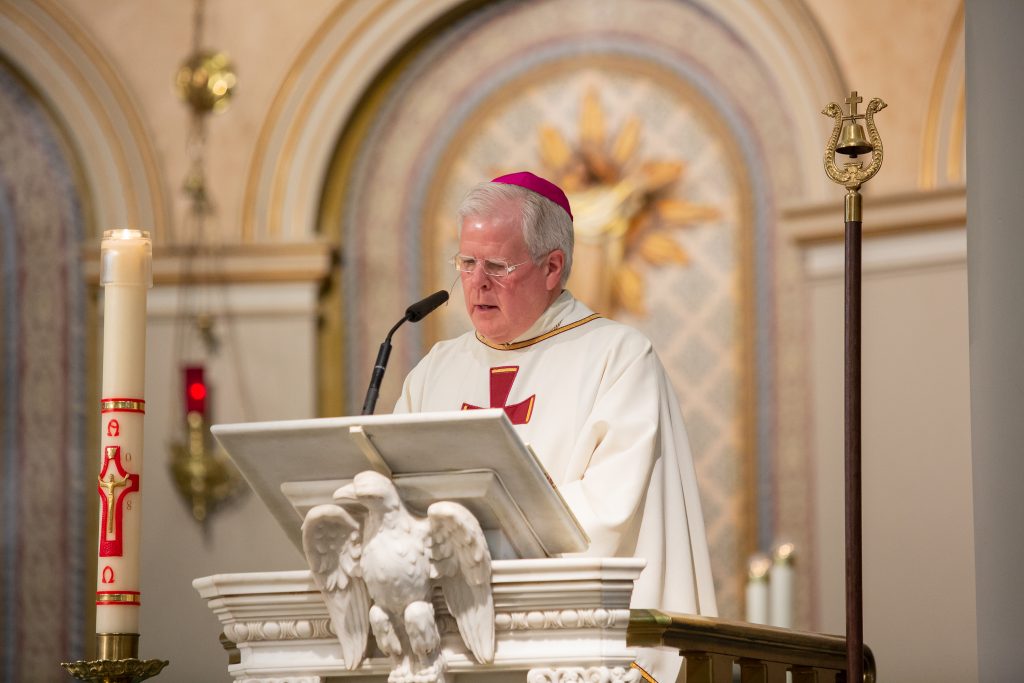 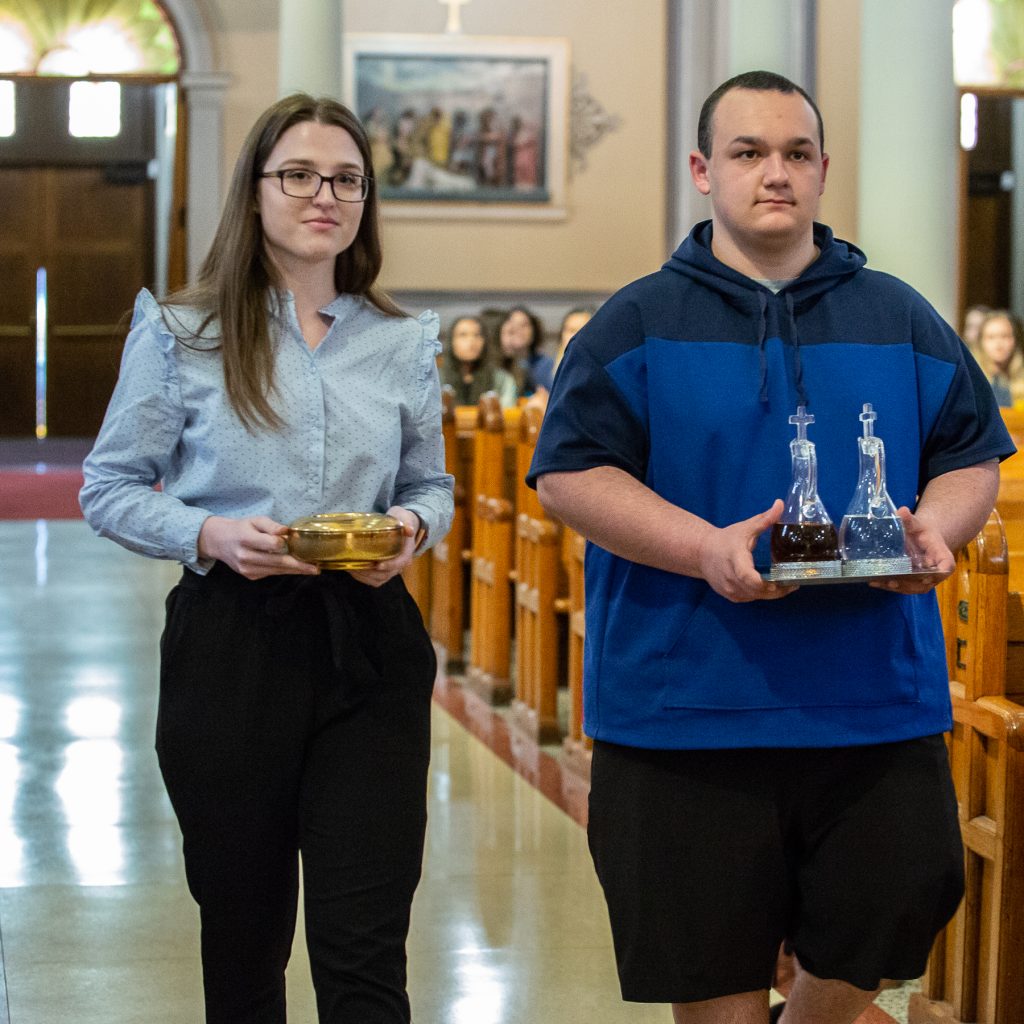 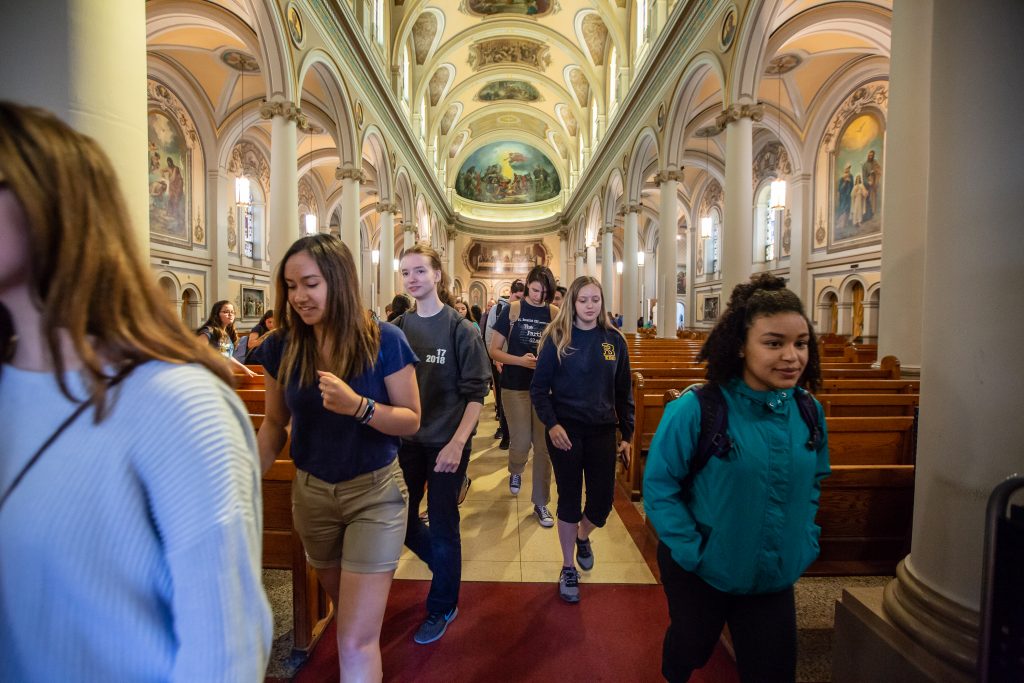 Following Mass students and staff walked to the WE Global Learning Centre where a day of presentations and discussion about the essence of servant leadership and the great work being done to provide sustainable access to clean water around the world by those involved in the Canadian Catholic Organization for Development and Peace and WE. 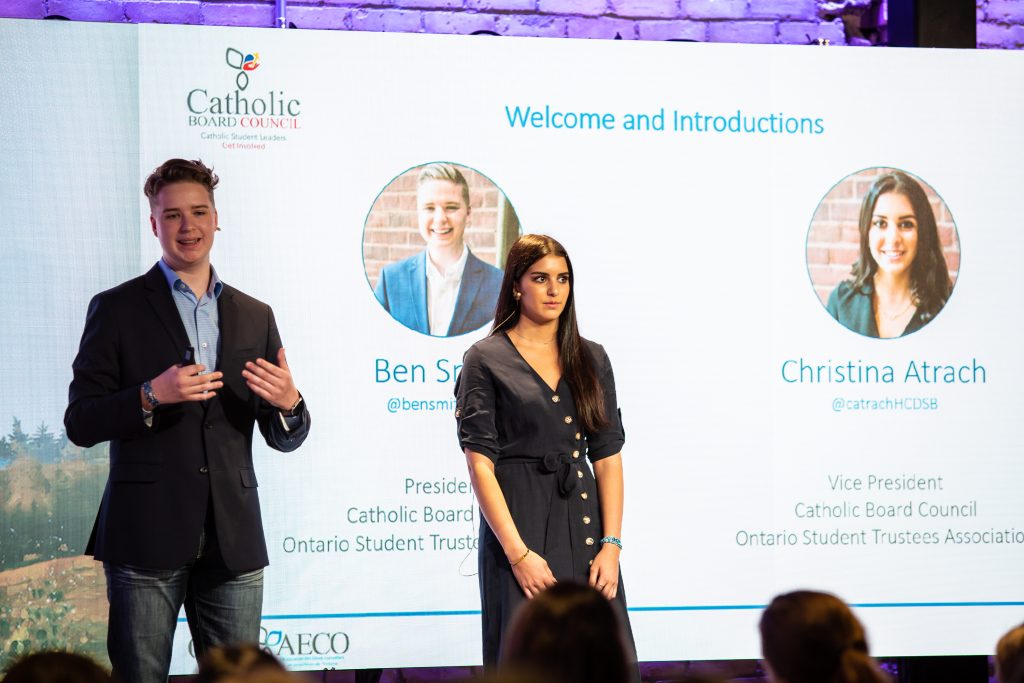 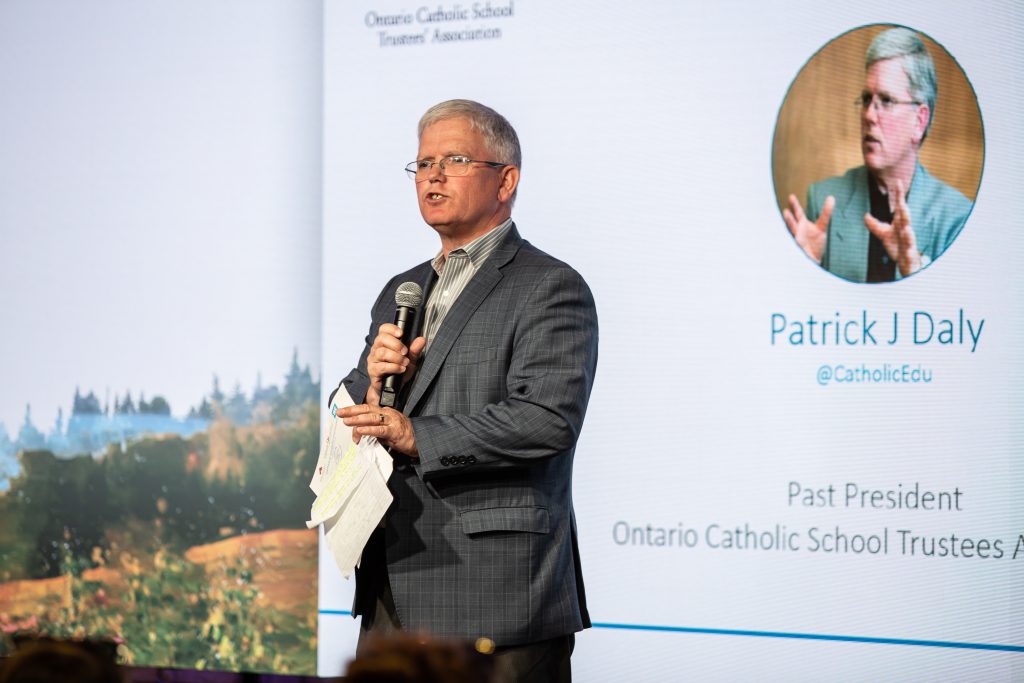 OCSTA Past President, Patrick Daly addressed the gathering of students to congratulate the Catholic Board Council student trustee leadership team responsible for the OCSYD Event and to recognize and honour the achievements and commitment to Christian service that defines so many students and staff in Ontario’s publicly funded Catholic schools. 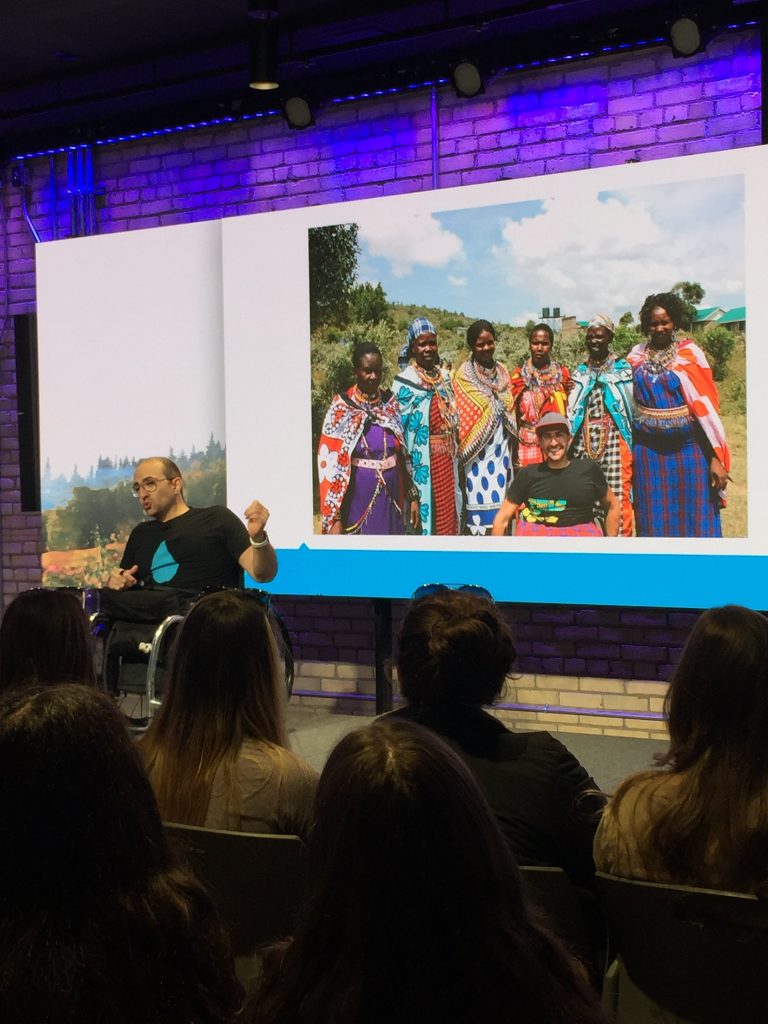 Social Activist, Spencer West discusses his calling to help the vulnerable close to home and around the world to overcome challenges during Ontario Catholic Student Youth Day. 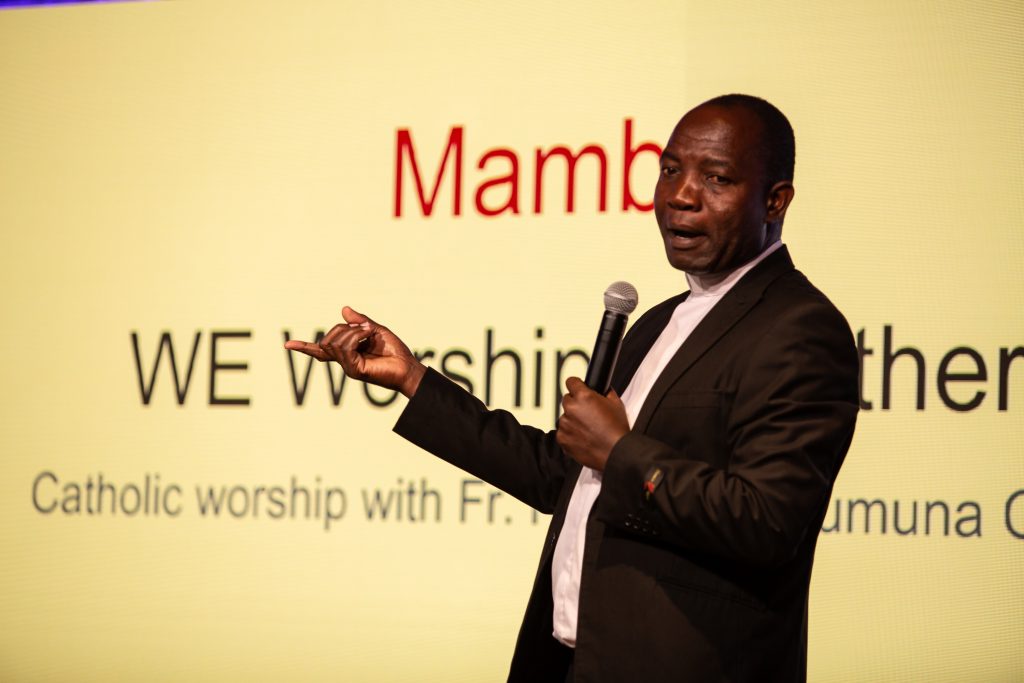 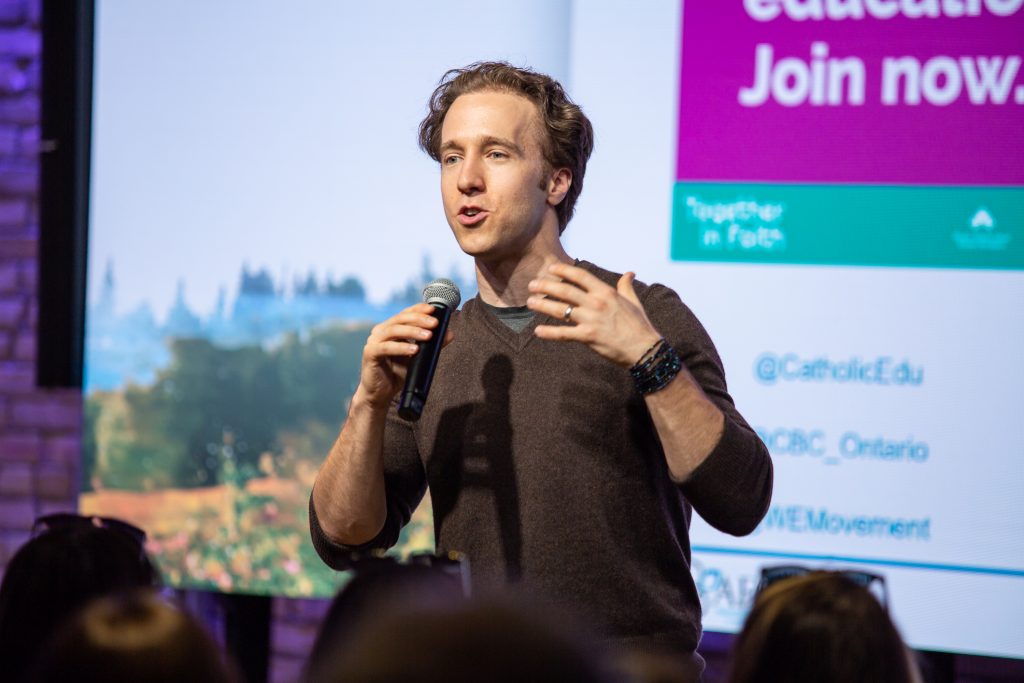 A visit by WE co-founder, Craig Kielburger provided an unexpected afternoon highlight.

Students welcomed the surprise visit by Craig Kielburger who took the opportunity to not only greet students and other guests in attendance, but also took a few moments to talk about his Catholic education experience in Ontario and specifically about his grade 8 teacher Mr. Fredrigoni of  Blessed Scalabrini Catholic Elementary School in Thornhill (York CDSB).

Mr. Fredrigoni was the teacher who first  encouraged Craig to act upon his desire to help children enslaved around the world by developing a project to address the issue. That encouragement eventually led to Craig and 11 of his 12 year old peers starting a group that would later evolve into the well known Free the Children organization. 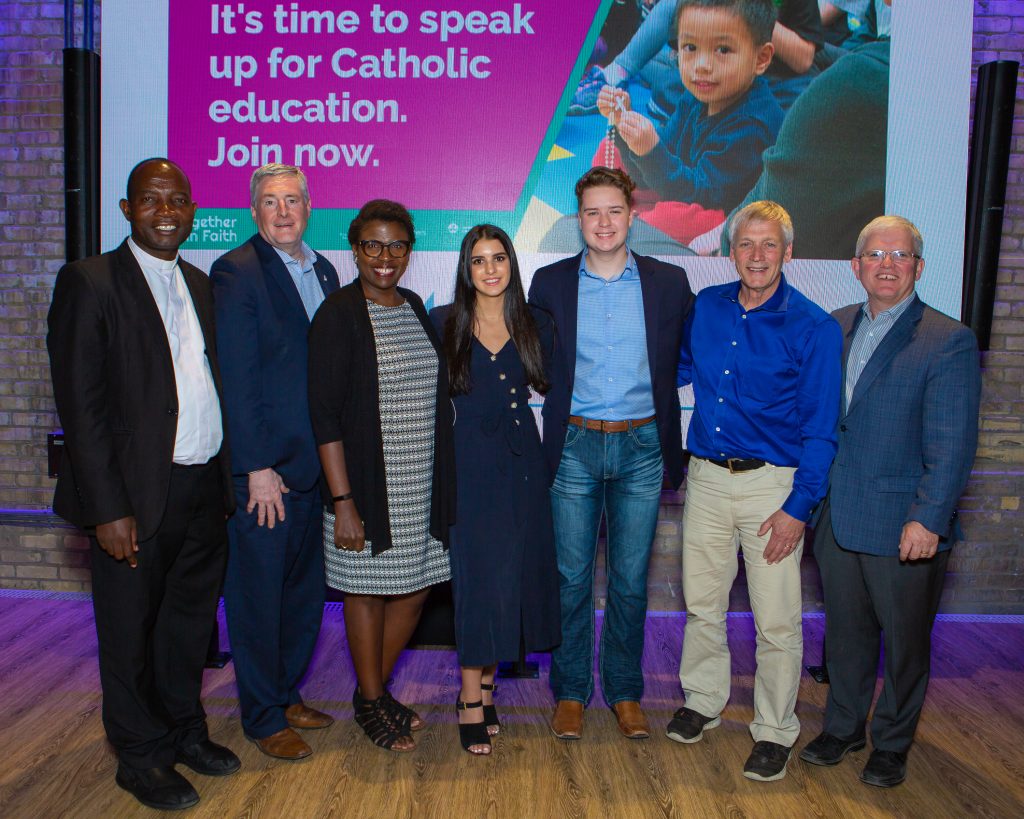 Catholic Education Week Highlights from Across the Province 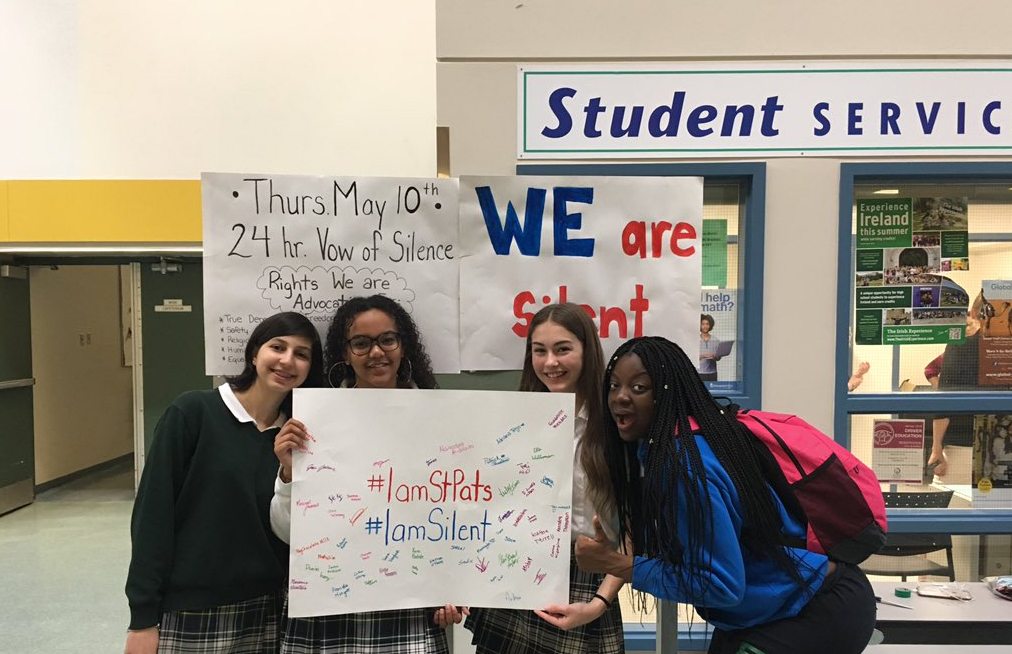 TWITTER HIGHLIGHT from St. Patrick’s Catholic High School (Ottawa Catholic School board): @stpatricksIRISH Taking a stand for injustice today and standing in solidarity for those silenced around the nation and world every day #IamStPats #CatholicEdWk 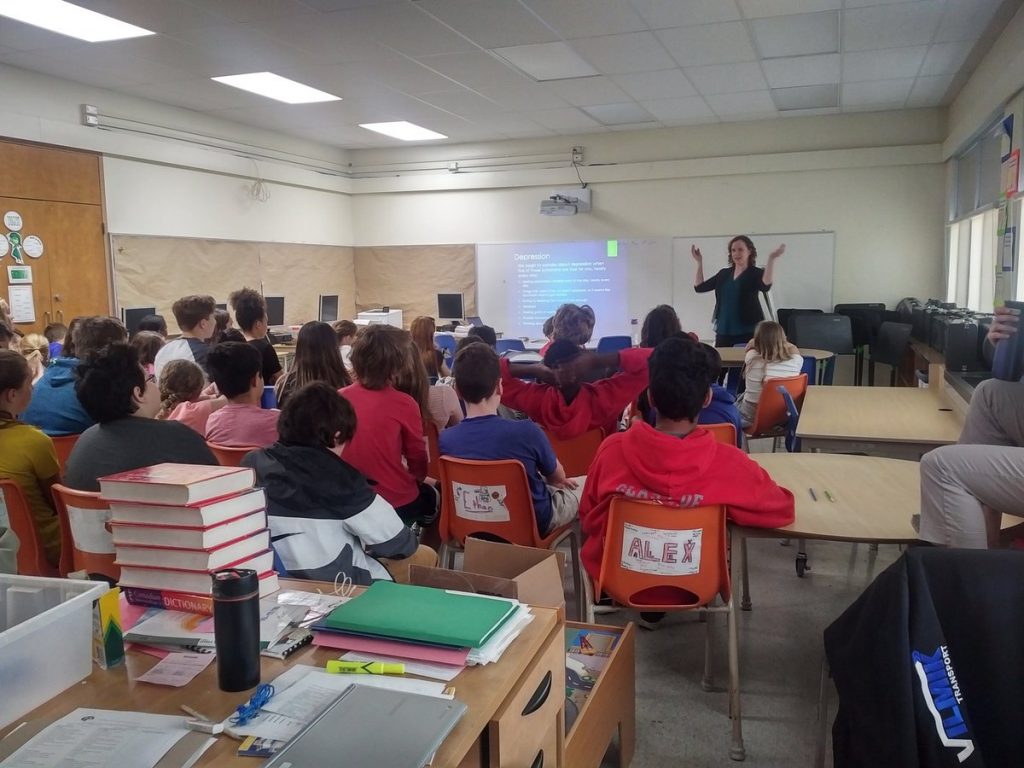 TWITTER HIGHLIGHT from St. Paul Catholic Elementary School (Waterloo CDSB): Thank you Sharon Porty, WCDSB’s Mental Health Lead for teaching the gr 6-8 students about ways to promote Mental Health & how to recognize signs that you may need to talk to someone for support 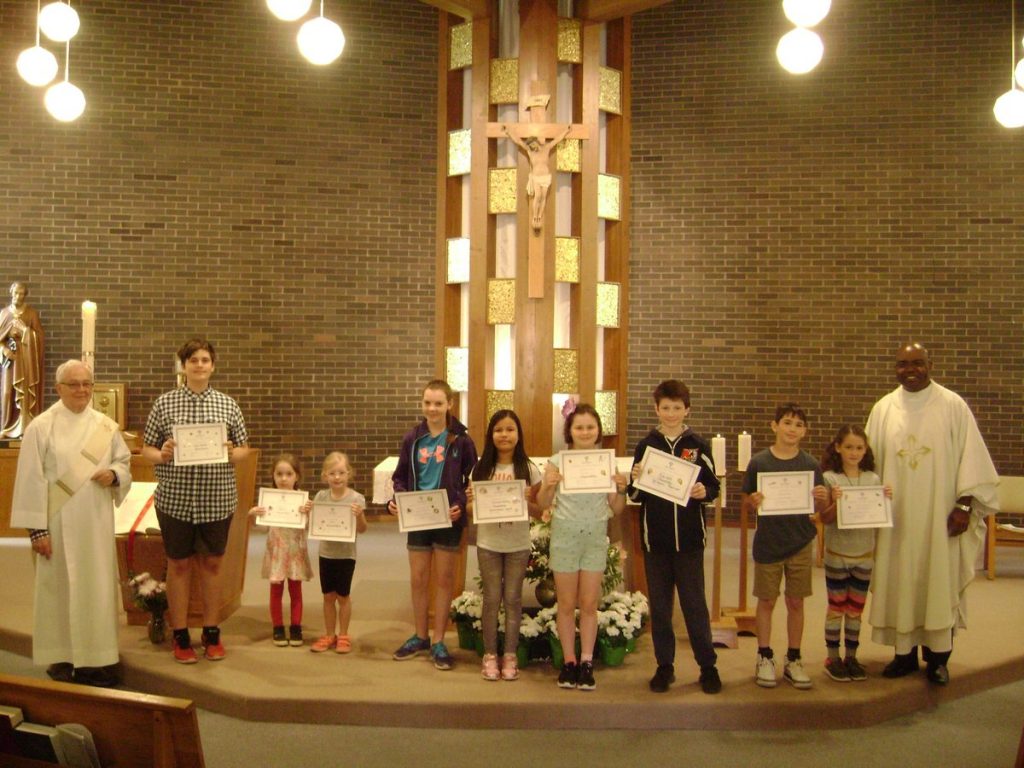 TWITTER HIGHLIGHT: Our friends at Holy Cross attended a mass at St. Peters church yesterday as part of #CatholicEdWk. We are so blessed to celebrate the gift of Catholic Education with our school communities!
Toronto Catholic District School Board 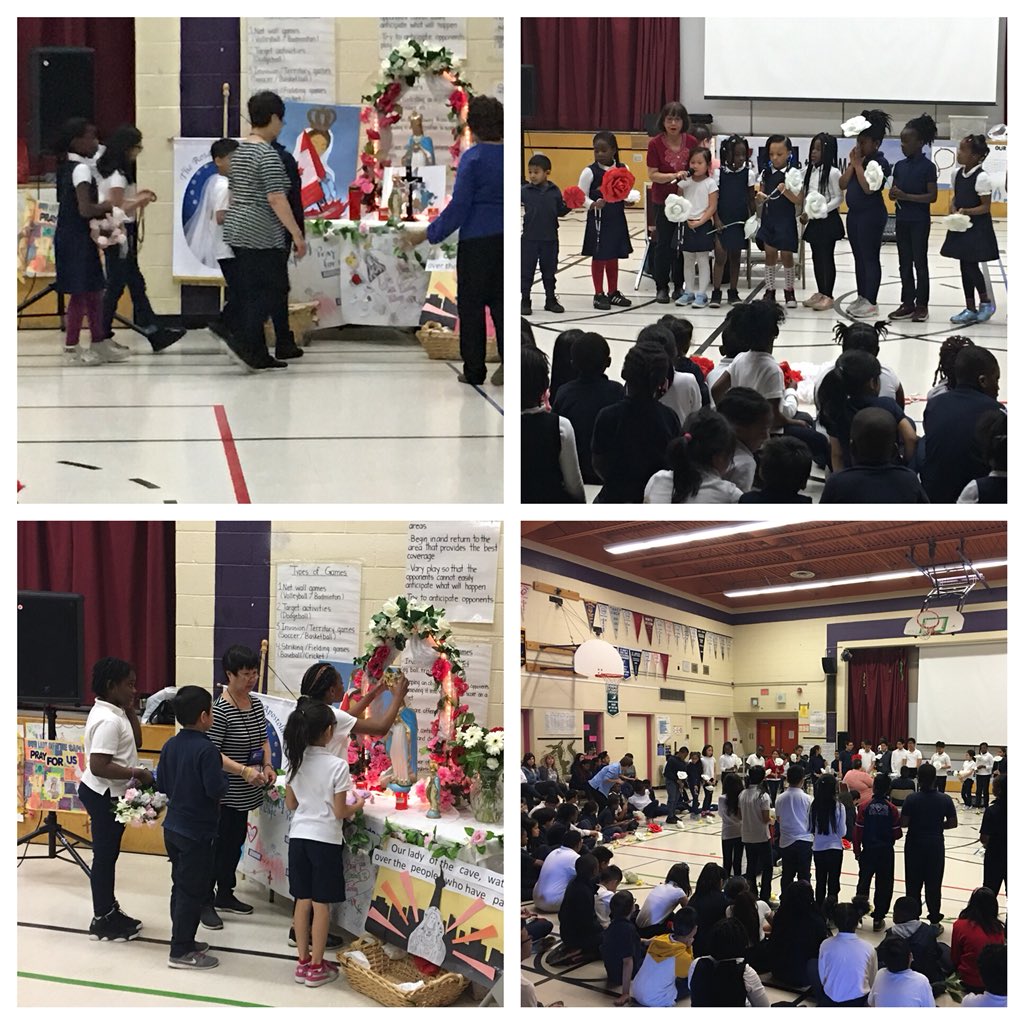 From St. Francis de Sales CES (Toronto CDSB): A beautiful start to Catholic Ed. Week. Today we celebrated the Living Rosary. Thanks to the ladies of the Rosary Apostolate who worked with our students all year and organized this wonderful and powerful community prayer event. #CatholicEdWk 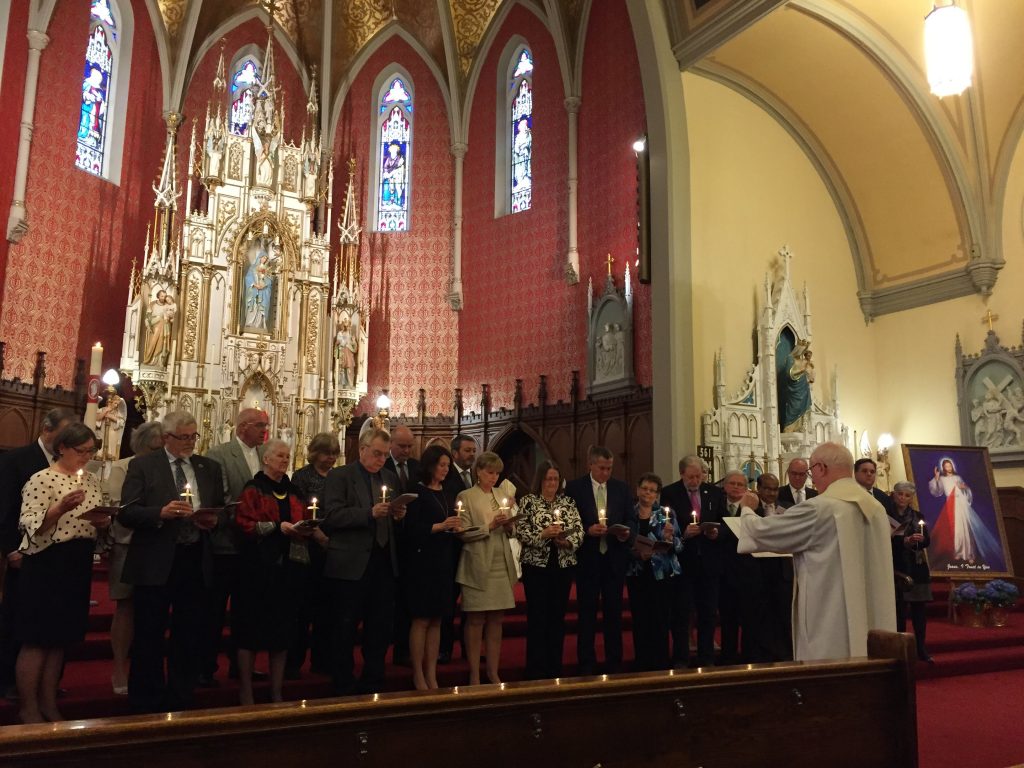 Fr. Patrick Fitzpatrick leads the Commissioning Ceremony prayer for OCSTA’s 2018-19 Board of Directors at St. Mary Our Lady of the Seven Sorrows Roman Catholic Church, Kitchener.

More than 250 delegates and guests gathered in Kitchener this year for the 2018 OCSTA/OCSBOA Business Seminar and OCSTA AGM and Conference held April 26 – 29. 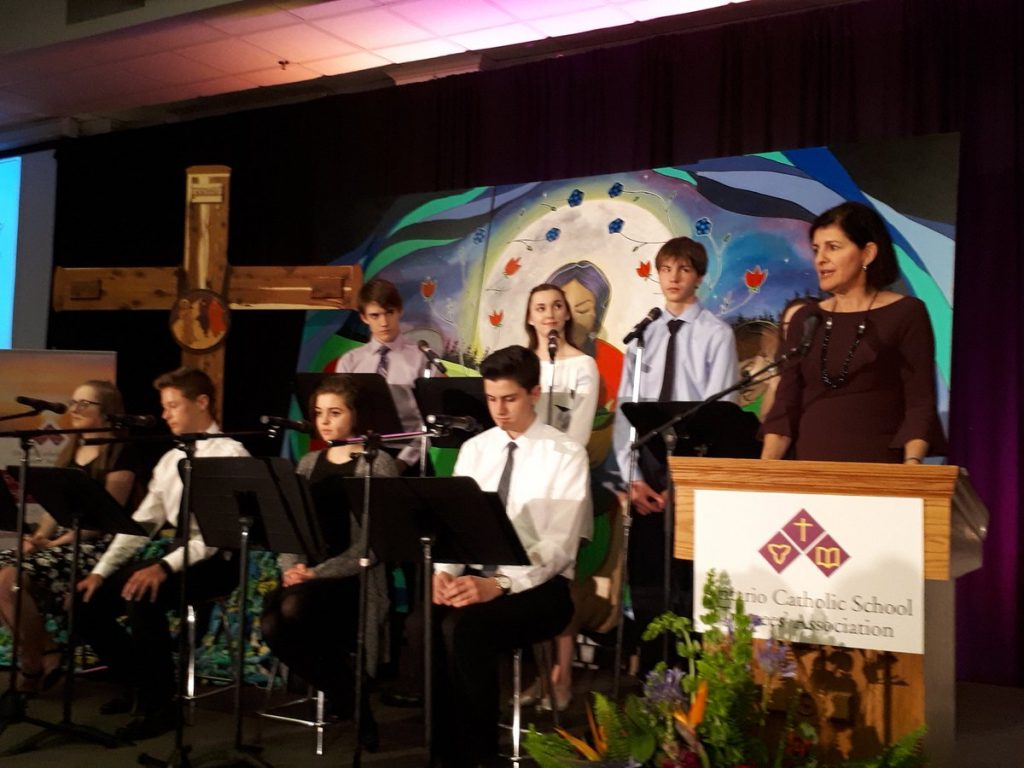 TWITTER HIGHLIGHT: Fr. Toby Collins, CR @Fr_Toby:  Loretta Notten introduces the dramatic reading: “A Courageous Legacy” performed by WCDSB students. They revealed to us why our Commitment to continuing the legacy of Catholic education is so important to the well-being of so many communities throughout Ontario. 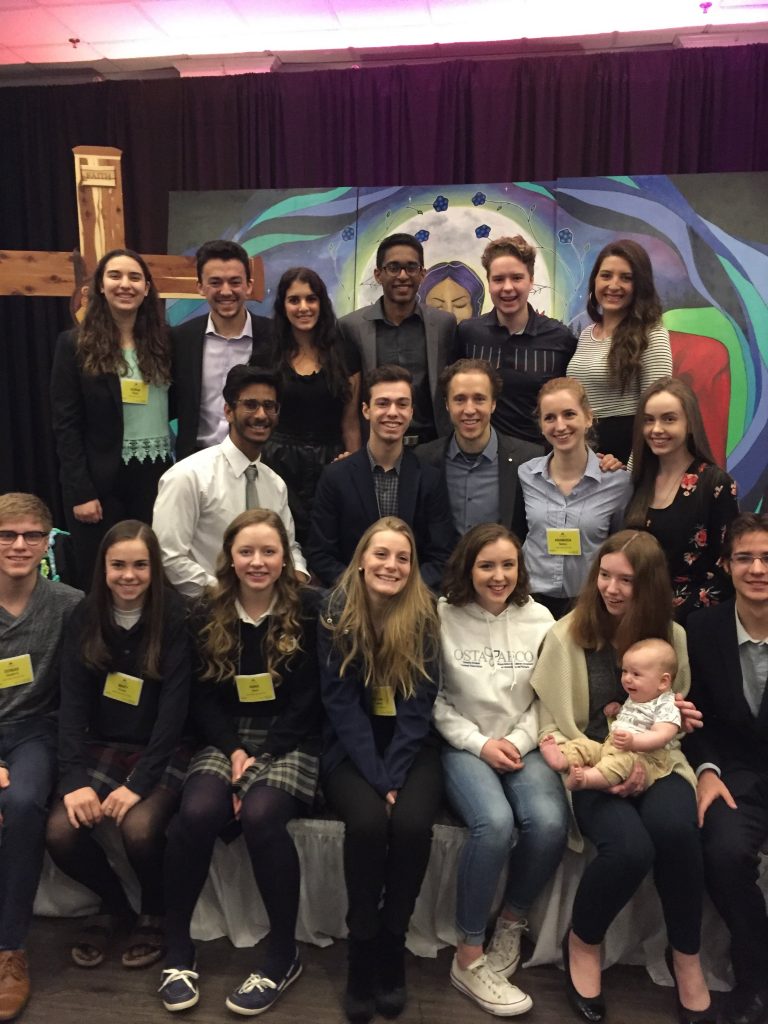 We would like to thank and acknowledge the following individuals from the Waterloo CDSB:

Presentations including MP3 audio files and PowerPoint slides from the Business Seminar Program and AGM and Conference Program have been uploaded to the Members’ Centre on this website – to access please click here.

Please note that you will need your user name and password to enter this secure area of the OCSTA website.  If you need assistance securing your user name and/or password please contact Ashlee Cabral at acabral@ocsta.on.ca or contact Sharon McMillan at OCSTA (416-932-9460).

See below photo highlights from this year’s AGM and Conference.

The Ontario Catholic School Trustees’ Association (OCSTA) Awards Program recognizes Catholic Trustees, Student Trustees and other leaders in Catholic education who have demonstrated outstanding commitment and service to others while exemplifying the values that are at the core of Catholic education. The Association announced the recipients of this year’s awards at the April 27 OCSTA Annual Awards Dinner in Kitchener.

This year’s recipient of the Trustee Award of Merit is long-serving trustee, journalist, and inclusionary education advocate John Curry of the Ottawa Catholic School Board. Through his membership on the Special Education Advisory Committee, John is a very vocal supporter of programming for students with special needs. He has been a proponent for French Immersion in rural and small schools and as a result of his advocacy, the Ottawa Catholic School Board offers the French Immersion pathway in all 83 of its schools. 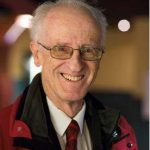 The OCSTA Special Award is presented annually to an individual who has made an outstanding contribution to Catholic education at the provincial level. This year’s recipient is Sr. Joan Cronin, former Executive Director of the Institute for Catholic Education (ICE). During Sr. Joan’s tenure at ICE, she elevated the profile of Catholic education and gained a tremendous level of respect and influence with educators, various Ministers of Education, Premiers and Bishops. As a former instructor in the Supervisory Officers’ Qualifications Program, Sr. Joan played a pivotal role in forming generations of Ontario’s outstanding Catholic school board supervisory officers. 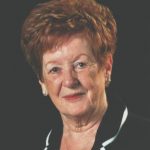 The Student Trustee Alumnus Award is presented annually to Catholic school graduates who served as student trustees at the secondary level and since graduation have demonstrated through their actions the values articulated in the Ontario Catholic Graduate Expectations framework. This year’s recipient is Dr. Anthony Silva. A former student trustee from the Kenora Catholic District School Board, today Dr. Silva is an Orthopaedic Doctor who has committed his life to helping others through medicine. For more than five years, he has focused on palm frond injury research to support workplace Health and Safety initiatives in addition to conducting research focused on the mental well-being of doctors in the medical profession. 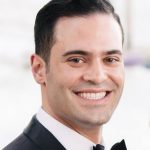 For your refeference, following are some of the key details for trustees to know regarding the 2018 Municipal Election.

Publicly Funded Catholic Schools, A Cause to Celebrate – By Patrick J. Daly