“Today’s announcement by the Minister of Education represents a first step towards providing the kinds of additional resources school boards require to support students with ASD transitioning to Ontario schools on a full or part-time basis. OCSTA remains concerned about the adequacy of the funding announced, given the still to be quantified level of need arising from the government’s changes to the Ontario ASD program. We will comment further upon review of more detailed information from the government.”

On March 7, Minister of Finance, Vic Fedeli announced that the recently released Ontario 2018-19 Third Quarter Finances “forecasts an improvement of $1.5 billion in the Province’s deficit to $13.5 billion”.

Join us in Downtown Toronto for OCSTA’s 2019 AGM 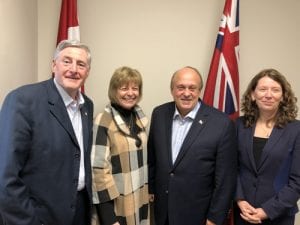 On Friday, March 8, OCSTA President Beverley Eckensweiler, Vice President Michelle Griepsma and Executive Director  Nick Milanetti met with The Hon. Michael Tibollo, Minister of Tourism, Culture and Sport and MPP for the constituency of Vaughan-Woodbridge. The meeting provided an opportunity for OCSTA representatives to share with the Minister the priorities of Catholic school boards in Ontario and articulate the contributions that Catholic schools make to the vitality and success of the province’s education system and all communities as a whole.

The meeting was very positive and the Minister acknowledged the value and importance of publicly funded Catholic education in this province.

Toonies for Tuition – The Ontario Campaign

REMINDER: The deadline for raising funds as part of the Ontario Campaign for Toonies for Tuition is Catholic Education Week (campaigns can conclude any day during the week May 5 – May 10).

After the conclusion of Catholic Education Week, OCSTA will announce the total amount raised by Catholic school boards for the Ontario Campaign to Support Toonies for Tuition.

For details on the campaign please see the August 23 – Ontario Campaign Memo.