On May 12, during the emergency session in the Legislature, MPPs voted to extend Ontario’s state of emergency until June 2.

The current (emergency) order in place since March 17 was set to expire on May 12.

The government indicated that legislature will also sit on May 19, 20, 26, 27, June 2 and 3 for Question Period and for COVID-19 related business.

The Premier has indicated that Information on the reopening of Ontario schools is expected to be announced next week.

On May 9, the government announced that an emergency order had been approved to enable school board employees to be voluntarily redeployed during the COVID-19 pandemic, to congregate care settings, including hospitals, long-term care homes, retirement homes and women’s shelters. OCSTA issued an email on this matter to all CDSB Chairs and Directors of Education on May 9, 2020. 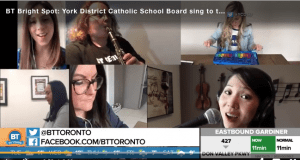 The recent Catholic Education Week promotion – Igniting Hope – held at every Catholic school board across Ontario last week was by all accounts very successful as students, staff and clergy brought to life the Catholic world view on hope and faith. 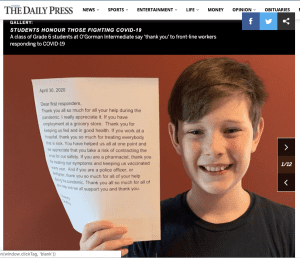 Even though much of the programming, including local and provincial Masses for Catholic Education Week, had to be held in virtual (online) formats due to physical distancing restrictions, engagement was high and the creative projects and acts of service generated attention throughout Catholic school communities and the media. 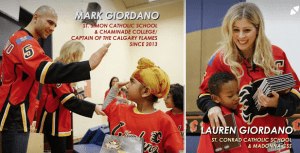 To view an overview of Catholic Education Week highlights across Ontario click here.

OCSTA would like to thank all Catholic school boards for their quick and effective adaptation of existing Catholic Education Week curriculum activities, resources and plans given to address current restrictions and school building closures. 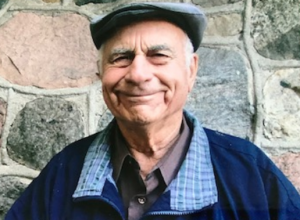 It is not often that OCSTA has the opportunity to recognize the 100th birthday of a former Catholic school trustee. However, Association President Beverley Eckensweiler did just that for former Wellington County Separate School Board Trustee Mr. Abbey Densmore who celebrated his centennial birthday on May 8th.

The Wellington Catholic DSB Chair, Marino Gazzola recently informed OCSTA that Mr. Densmore, a founding member of the Guelph region’s first Catholic school board, remained very engaged and interested in the ongoing activities of Catholic education, even though he now resides in a retirement home.

A written letter of greeting from OCSTA was presented to Mr. Densmore on May 8th. Congratulations Mr. Densmore! 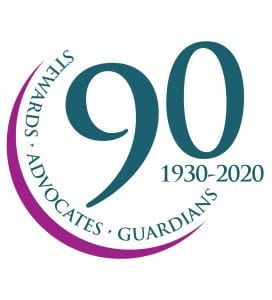 As explained in a recent memo to all trustees and directors of education, OCSTA’s planned 90th Anniversary celebration event has been tentatively postponed until January. While the in-person celebration will hopefully take place in the coming months, we have created an online centre to currently recognize the important role of democratically elected Catholic trustees in the history, advocacy and protection of publicly funded Catholic education in Ontario.

We invite all OCSTA members and supporters of Catholic education across Canada to visit, view and share the information and resources presented on the Association’s 90th Anniversary website at: https://www.ocsta.on.ca/events-2/90-years-of-advocacy-and-service/.

On this page you will see links to the various brief statements on the local Catholic trustee experience submitted by Catholic Trustees from across Ontario under the section “Catholic Trustee Voices Today”. We would like to thank the following trustees for sharing their unique experiences:

The Board of Directors of the Sudbury CDSB