On June 27th, OCSTA hosted the 90th Annual General Meeting to discuss members’ resolutions and conduct annual elections. For the first time in 90 years OCSTA members did not meet in person, but met “virtually” using an online, webinar platform. This format ensured that the business of the Association could continue while adhering to provincial restrictions that are in place to help curb the spread of the current pandemic. Over 180 delegates participated in this event.

Please see below the official election announcement and news release that was distributed on June 28th. 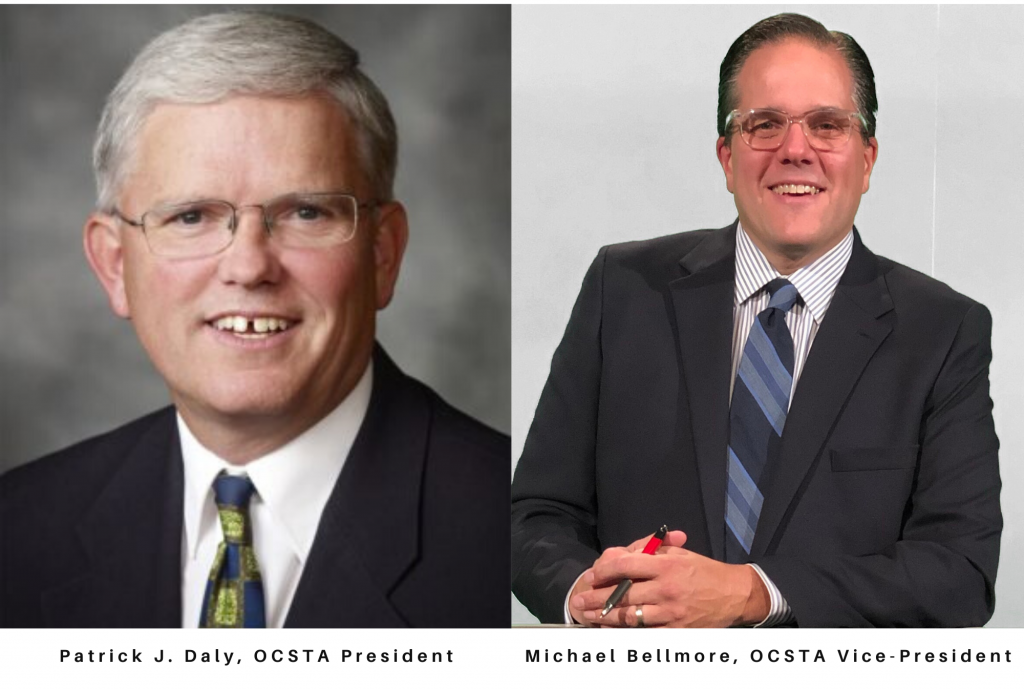 Toronto – June 28, 2020 – The Ontario Catholic School Trustees’ Association (OCSTA) is pleased to announce that Patrick J. Daly, Chair of the Hamilton-Wentworth Catholic District School Board, was acclaimed as President of OCSTA at the Association’s 90th Annual General Meeting on June 27.

“Throughout my life I have been blessed to witness the tireless work, commitment to cause, sacrifice and goodness of those who have accepted the call to serve as locally elected Catholic School Trustees. I am honoured to represent and serve with such women and men today and united with them pledge to work to protect and promote the precious gift of publicly funded Catholic Education,” said President Daly.

A former President of OCSTA, Patrick Daly is noted for his leadership in obtaining equity in education funding for all students in Ontario. The legislation behind this achievement was ultimately upheld by the Supreme Court of Canada.

“During these unprecedented times in publicly funded education and in the life of our province we see people of good will coming together to overcome the challenges of our day. Over the past 90 years, in times of challenge OCSTA on behalf of its member Catholic School Boards has searched for opportunities and working with governments and other provincial associations has significantly contributed to the faith formation, academic excellence and well-being of students/children. Rooted in our faith Catholic Schools have and continue to promote the truth that all children are created equal and in the image of our loving God. They have celebrated and been strengthened by the diversity in our schools and province. In partnership with parents, parishes and dedicated teachers and other staff the OCSTA and its 29-member Catholic School boards remain committed to continuing to enable all children to realize their fullness of humanity of which Jesus Christ is the model,” said President Daly.

“I would like to recognize and thank Past President Beverley Eckensweiler and outgoing Vice-President Michelle Griepsma for their strong leadership, tremendous service and constant Christian Witness,” added President Daly.

The following trustees were appointed to the OCSTA Board of Directors for the 2020-2022 term:

The complete list of trustees on OCSTA’s Board of Directors can be viewed at https://www.ocsta.on.ca/ocsta-board-of-directors.

Niagara Catholic District School Board Trustee, Leanne Prince was elected by the membership to represent OCSTA on the Board of Directors for the Canadian Catholic School Trustees’ Association.

The Ontario Education Services Corporation that is governed by all four of Ontario’s Trustee Association’s and charged with the mandate of serving the needs of school boards, has relaunched the Trustee Professional Development Program.

New to the program is a “Certificate of Completion feature. This feature allows trustees to track their progress through the modules and then request a certificate once they have completed the program.

As we transition into the summer months and boards continue to manage unprecedented challenges, we invite you to complete this governance training. The new program website will allow you to track your progress through the modules – each one has been recently updated with the latest legislation, education policy and research. When you’ve completed the program, you may apply for a Certificate of Completion. OESC will certify eligible trustees in recognition of their commitment to leadership and the good governance of Ontario’s education system. 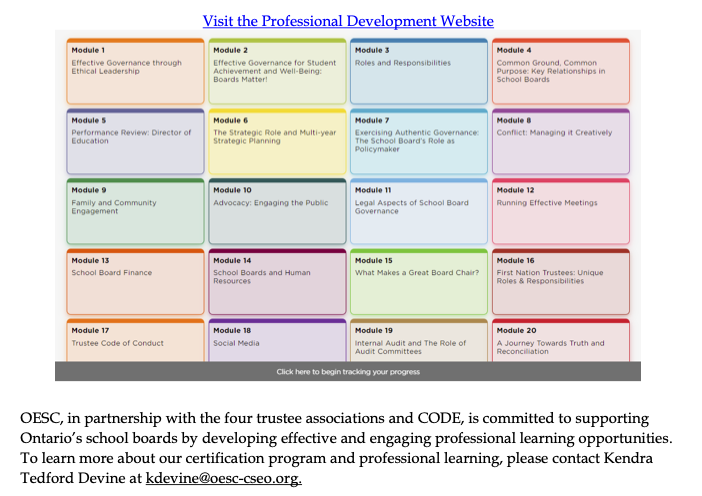 Provincial Election The Lieutenant Governor of Ontario, the Honourable Elizabeth Dowdeswell, has...

Ontario's Minister of Education Stephen Lecce announced on April 26 that the Brant...