“May the church be the place of God’s mercy and love, where everyone can feel themselves welcomed, loved, forgiven and encouraged to live according to the good life of the…

“May the church be the place of God’s mercy and love, where everyone can feel themselves welcomed, loved, forgiven and encouraged to live according to the good life of the Gospel. … To make others feel welcomed, loved, forgiven and encouraged, the church must have open doors so that all might enter. And we must go out of those doors and proclaim the Gospel.”

One year ago today Jorge Mario Bergoglio, an Argentinean Jesuit, became the 266th bishop of Rome and leader of 1.2 billion Catholics around the world. The Holy Father chose the name Francis as his papal name in honour of St. Francis of Assisi–a 12th century Franciscan friar known for his simple lifestyle and dedication to the works of mercy.

Here in Ontario, Pope Francis has made a significant impression among many people of many faiths, but especially our Catholic youth.  Ontario’s Catholic student trustee leadership, led by the Catholic Board Council President, Madeline Ellapola (Windsor-Essex CDSB), has been so moved by the actions and words of Pope Francis that they have invited the Holy Father to share greetings with Ontario’s Catholic school students during the first ever province-wide Mass.  OCSTA has not yet received confirmation that Pope Francis will be sending a message for this celebration – but we are hopeful!

The “province-wide” Mass is scheduled to take place at 10:30 a.m., EST on May 7, 2014 as part Catholic Education Week. All boards were invited to participate.  More information is here.

The Archdiocese of Toronto has created an interesting “infographic” containing facts about Pope Francis that we encourage you to read and share. Click on graphic to enlarge. 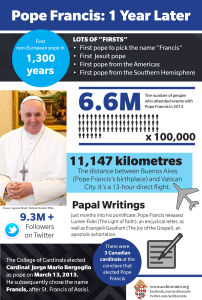 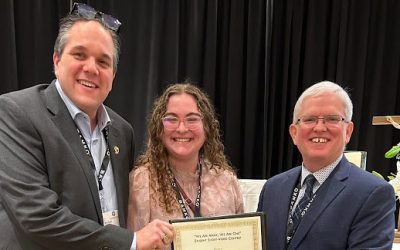